Anthea Pokroy, a flame-haired artist based in Johannesburg, South Africa, does something quite brilliant: she actually collects gingers.

Starting back in 2010, Anthea’s two-and-half-year photography project I collect gingers brought together portraits of more than 500 natural redheads from all over the world. 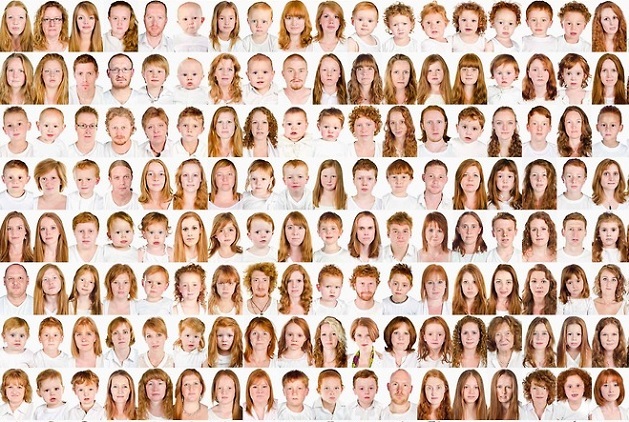 Her work explores the notion of archiving and collecting through photography. The project was turned into Anthea’s first solo exhibition in January 2013, which featured a Ginger Manifesto, ginger history and ginger identity cards, intended to create a system of classification around a self-identified ‘race’ of gingers.

Anthea’s next mission is to analyse the likenesses and differences between the 500 subjects within her ginger collection, focusing on hair, eyes, freckles and skin. This will all be documented on Anthea’s Tumblr, a  two-week online art residency and journal where you can follow the progression of her findings.

“Through a continuous process of gathering groups of people, I am interested in identifying collective experience, communal identity and ‘otherness’.

“These investigations all feed into the exploration of my own identity as a white, (ginger), Jewish, female artist living in Johannesburg, South Africa.

“Working in South Africa, a context that has historically been obsessed and oppressed by skin colour, I suggest an ironic alternative to genetic and pigment-based racial profiling. I started to imagine a ‘ginger utopia’ and what its implications would be.”

Anthea’s work has now been selected to be a part of the top 100 for the Absa L’Atelier competition and will be on show at the Absa Gallery in Johannesburg in July 2014.

You can follow Anthea’s fascinating work on Tumblr here, and to view portraits from I collect gingers, visit www.icollectgingers.com.