Facts and Myths About Red Hair

As a redhead, it’s hard to not go through life and hear things about your ginger hair.

And sometimes, it can be hard to distinguish fact from myth, so this page is for you, fellow redheads. Here’s a round-up of ginger myths and facts – the good, the bad, and the plain funny.

Blink and you’ll miss us

It’s estimated around 1-2% world’s population has natural red hair. That’s a small number, but it represents a very proud population.

Western Europe houses more redheads than anywhere else in the world. Scotland holds the highest ranking with an approximate population of 13% redheads, followed by Ireland at 10% and the United States rounds out the bottom with 2%.

There is one specific gene responsible for natural red hair (something we enjoy calling ‘the ginger gene’). This is the melanocortin 1 receptor, also known as MC1R for short. Many thanks go to Professor Jonathan Rees who is responsible for discovering what makes redheads special after conducting a study at the University of Edinburgh in 1995.

This ginger gene is a slight mutation of the MC1R gene on chromosome 16. Which basically means that redheads are like superheroes, but naturally so, not due to some weird chemical reaction. Everything we love about being redheads comes from this mutation: ginger hair colour (in varying shades), pale skin, and freckles EVERYWHERE.

Extensive research conducted by BritainsDNA has found that more than 40% of the population carry the mutated MC1R gene that’s responsible for red hair. If both parents carry the ginger gene, you have 25% chance of bearing a beautiful ginger bairn. And if two gingers parents a child, they have 100% chance. Lucky!

Sunny on the inside

Having pale skin may mean that redheads burn more easily when exposed to UV rays, but their paleness can serve as an advantage.

Redheads can’t absorb sufficient Vitamin D due to low concentrations of eumelanin in their body. This may sound like bad news, but this lower melanin-concentration means that gingers can cleverly produce their own Vitamin D within their body when exposed to low light conditions.

Superpowers aside, it’s also been reported that redheads require more anaesthesia and are harder to sedate than other hair colours. Depending on the research you read, it’s estimated that we need about 20% more anaesthesia to prevent us from waking up mid-surgery. Um, good to know!

Some claim that redheads bruise more easily than those who have other hair colours. We’re also said to have more sensitive teeth, which explains why we dread the dentist so much.

Is it cold or is it just me?

Redheads may be more sensitive to cold, too. Bring on the warm weather! Wait, warmth brings sun. Sun is responsible for sunburn and massive amounts of sunblock, particularly for redheads who are at a much higher risk of getting skin cancer. But you knew that one already.

Stick to your roots

Natural red hair is harder to dye than other shades. It holds its pigment much firmer than any other hair colour. If redheads desired to dye their hair to any other colour (why would you?), it would only have a noticeable difference after bleaching the hair beforehand. Otherwise, the colour won’t take.

Redheads have less hair on their heads

In terms of total number of strands, gingers have far fewer atop their red heads than any other colour. On average, flame-haired beauties have 90,000 strands, compared to blondes with 110,000, and brunettes with 140,000.

They’re not exactly going bald though, as each strand of natural ginger hair is much thicker, so the appearance is often that redheads have more hair in general.

Ginger hair retains its natural pigment a lot longer than other shades, so there’s no need to panic about going grey. Red hair simply fades with age through a glorious spectrum of faded copper to rosy-blonde colours, then to silvery-white.

There are some nifty hair products for redheads out there that can help to enhance your gingerness, though!

Thanks to our natural awesomeness, and the greatness of famous redheads, people like to copy us. Out of the women who dye their hair at home, 30% choose red shades. I mean, who wouldn’t want to walk on the ginger side of life? 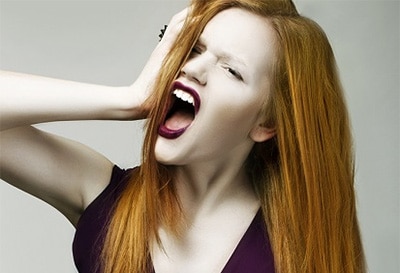 We’ve got a lot to be proud of as redheads, but some do not share this sentiment as there has been fear surrounding our mystical hair. History has shown that redheads were targeted for the colour of their hair.

For instance, redheads were once thought to be conceived out of “unclean” sex. And of course, interesting nicknames were created to remind us of this myth (i.e. tampon top). That’s real nice.

Many redheads were thought to be witches and hair colour alone was enough cause to be put to death. Common redheads’ traits of freckles and moles were also seen as “marks of the devil” and signs of satanic connections.

And who can forget the stereotype that every redhead has heard at least once in their life: “Redheads have no souls.” Special mention here to South Park for making this myth virtually indestructible. Supporting this untrue pop culture reference, Satan is often portrayed as having red hair because it supposedly shows sexual desire and moral degradation.

A tradition in Poland states that if you pass three redheads in a row, you will win the state lottery. If you want to have a little fun, get a couple of your redhead friends to accompany you to Poland on an adventure trip and have fun walking along. Redhead luck to everyone!

In Corsica, France, one must spit and turn around to avoid bad luck if passing a redhead on the street. Continue your adventure with your friends and visit Corsica and see what happens.

British tradition says that on New Year’s Day, your first caller will bring you luck. Brunettes bring the best luck, blondes bring none, widowers are bad luck, and redheads bring the worst luck!

Russia is apparently named after the redheaded Viking, Rurik, whose name means ‘land of reds’.

Denmark believes it’s an honour to have a redheaded child! Finally, this country has got it right!

The biggest ginger myth of all:

Redheads are going extinct. NO WAY.

READ: Do Redheads Bruise More Easily Than Other Hair Colours?