It’s fair to say that Prince Harry is the redhead of the moment right now. Since his marriage to Meghan Markle in May 2018, all eyes have been on him, everyone trying to get a glimpse into the royal redhead’s life. Like, is baby Archie ginger or not?

But of course, with great fame comes many an invite to social engagements, and Prince Harry himself simply cannot attend all of them. Luckily that’s where Rhys Whittock steps into frame, who is, quite frankly, Harry’s perfect doppelgänger. A natural redhead, Rhys has found that his looks tie totally in line with Harry’s (beard included) and now works as a Prince Harry lookalike, travelling the world and spreading ginger joy everywhere he goes.

What’s the story behind you becoming a Prince Harry lookalike? Have people always said you look like him?

I sent emails to lookalike agencies with photos of myself but never received a single reply back from anyone. So I thought, “Well, maybe I look like him a bit but not enough to be a professional lookalike”. I thought that was the end of that and didn’t think too much about it again.

When Harry and Meghan’s engagement was announced in November 2017, I saw it on the news and all the massive media attention and thought, “I really wish I was working as a Prince Harry lookalike now”. Unbelievably, the very next day I received an email from one of the lookalike agencies I had applied to: “Hi Rhys. I don’t suppose you still look anything like Harry do you?”. “Yes, I think so!”, I replied back. They asked me to come and visit them at their office in London and they put me on their books right away! I then applied to more agencies and they all wanted to have me on their books.

Apparently, when I applied all the way back in 2011, there wasn’t so much lookalike work for a Harry. He was in the army in this period and keeping a low media profile for security reasons. The few Harry lookalikes working at this time was enough to meet demand. However, with Harry planning to wed a Hollywood actress, lookalike work for Harry and Meghan’s suddenly exploded.

“I could never have imagined that this red hair of mine had at one stage in my life resulted in bullying, was now providing me with a living and allowing me to travel the world for work!”

What does your job entail when appearing as Prince Harry?

My work as a Prince Harry lookalike is generally split between photoshoots and party appearances. I have advertised for supermarkets, bookmakers, estate agents, newspaper spoof photos, sports equipment companies and restaurants.

Party appearances can be anything from small private parties such as a graduation or hen party to larger corporate parties with hundreds or even thousands of guests. These larger parties we get sent to are quite often at five-star hotels or beautiful manor houses. We even get to attend parties abroad in destinations such as Dubai, Italy and China.

I usually have to dress in a typical Harry suit or his military outfit that he wore to his wedding. At parties we have to greet guests as they arrive. Guests are very surprised to see us and it makes them smile and relax. People are usually quite shy at the beginning of the evening to have photos with us. However, after an hour people begin to lose their inhibitions after a few drinks and guests are constantly coming over and asking to have their photos. Guests love to chat with us for a few minutes asking us about our job. People are fascinated that you can earn a living by looking like someone else.

What are the best jobs you’ve done appearing as Prince Harry?

I think the best job I have done so far is being flown business class to Hong Kong for a billionaire’s birthday party in the gambling hot spot of Macau, China. There were a few other royal lookalikes with me and we flew together all that way to work for around 90 minutes at the party greeting guests and having photos with them. We got to stay for three nights at one of the world’s best hotels, Wynn Palace, Macau.

One of the craziest jobs involved me wearing Union Jack speedos in a hot tub boat with Prince William and Prince Charles lookalikes imagining what Prince Harry’s stag party may have looked like. 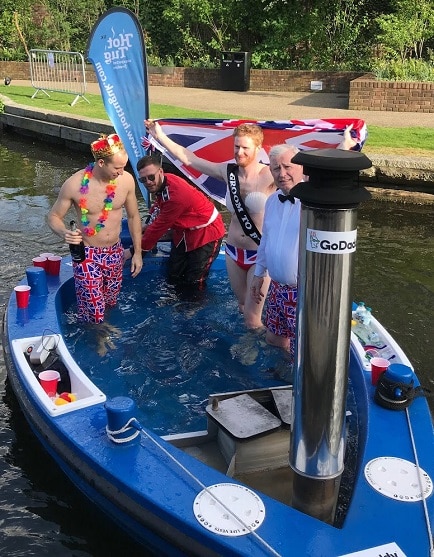 Have you ever met him?!

No, I have never met Harry. It would be really interesting and a bit surreal to meet him in person. I hope to meet him one day soon – I’d like to thank him for looking like me! I’m a year older than Harry, so strictly speaking he’s a Rhys Whittock lookalike as I was here first!

Can you do his voice?

Yes, I am also a soundalike for Harry. Since a kid I’ve always loved to fool about changing my voice to do every accent imaginable! So, luckily I can also sound like Harry. Not many of my jobs have so far required me to sound like him but I am getting more and more enquirers recently asking me to send videos of myself speaking to audition for speaking roles.

I’m lucky I don’t need to change my voice too much. I have a slightly posh twang to my voice and the main things I need to focus on is to speak a little slower, in a deeper voice and sound even posher.

I usually try to practice speaking like Harry with strangers such as ordering at a coffee shop. I was working quite a lot at Kensington recently, wearing Harry’s attire, so I liked to have a bit of fun confusing the staff. They were doing double takes and were open mouthed as they thought they had just served Prince Harry!

Being able to work as a lookalike for Prince Harry! I could never have imagined that this red hair of mine had at one stage in my life resulted in bullying, was now providing me with a living and allowing me to travel the world for work!

“We’ll have to see whether Harry and I start to get some grey hairs and whether he leaves them or colours them.”

Do you believe that your hair colour contributes to your personality?

Definitely! It’s probably the first thing people notice when they see me. Without a doubt it has shaped my personality so far! I’m sure if I had a different colour hair my personality would be a little different, not too much but just a little.

Do you have any family members with red hair?

My sister is a strawberry-blonde. My grandfather had red hair too so I must have got it from his genes. My hair will actually go quite blonde if I expose it to the summer sun but I normally wear a hat to avoid sunburn on my face.

What was your experience growing up with red hair?

Just like probably every other redhead in this country I suffered a little bullying. I can only remember this starting when I moved to a city at the age of 10. I was an easy target – a new boy to school, red hair and also I’d just started to wear glasses. 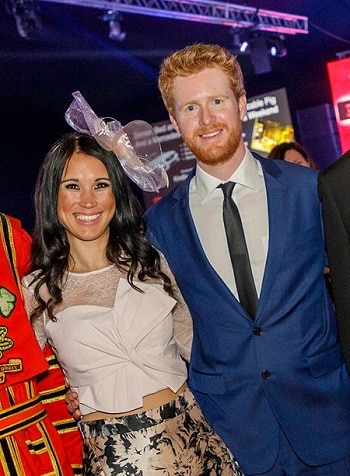 No. As a teenager, there was nothing I wanted more than to dye my hair. I decided against it in the end and I have never dyed my hair. Desperate to lose my distinctive red hair colour in my younger years, it’s now a crucial part of me being a lookalike for Prince Harry. We’ll have to see whether Harry and I start to get some grey hairs and whether he leaves them or colours them. It would be funny if I had to start colouring my hair red!

How do you feel about being called ‘ginger’? Do you think it should be used interchangeably with ‘redhead’, or is that something different?

Whenever someone abuses someone with red hair I think they would always tend to use the word ‘ginger’. So I think it’s used in a negative context. I would always prefer people to use the term ‘redhead’ personally.

What advice would you give to redheads who are being bullied?

You shouldn’t have to put up with it. Talk to your parents, friends and teachers. It will most likely then stop but even if it doesn’t, remember it won’t last forever.

“Seeing successful redheads in the media really would go a long way to reducing the negativity of red hair but I really think things have got a lot better than when I was growing up.”

Do you feel that there’s a shift of attitudes towards red hair in society nowadays? Why?

Yes, definitely. There are great role models in the public eye with red hair now. I would say that Prince Harry and Ed Sheeran have been responsible for that shift in people’s attitudes towards redheads. They have shown that you can be a redhead and be described as one of the most handsome men in the world (Prince Harry), you can be a redhead and sell millions of records as one of the most talented music artists (Ed Sheeran), and you can even be a redhead and be talked about for the role of James Bond (Daniel Lewis). I believe that without these famous red heads in society, attitudes would probably not have changed the way they have in recent years.

What do you think needs to be done to reverse the negativity surrounding red hair?

I think it would be a great start to see more and more red heads in the public eye. That includes models in magazines, TV presenters and film stars. Seeing successful redheads in the media really would go a long way to reducing the negativity of red hair but I really think things have got a lot better than when I was growing up. 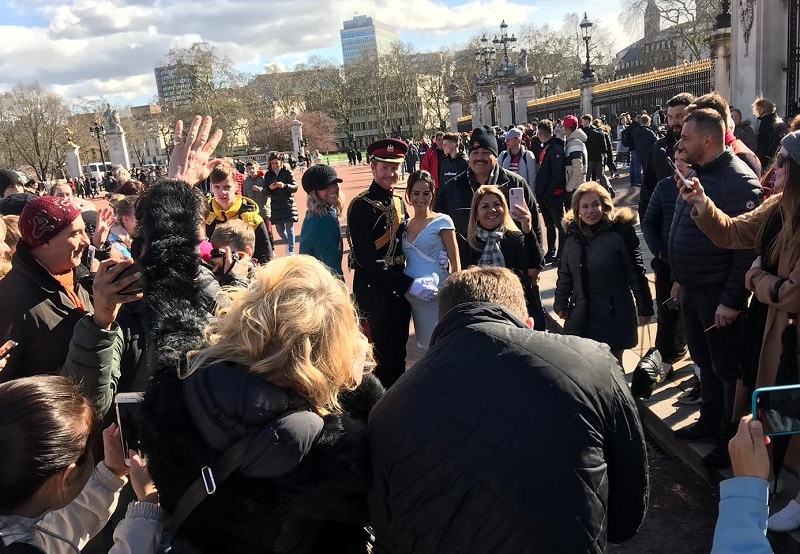 Now that baby Archie has been born, I am busier than ever with my lookalike work! I have some TV filming work and photoshoots for press advertisements in the next few weeks and quite a few meet and greets at private parties and events over the summer. I will soon be taking my last free flight with EasyJet to Sicily after winning their Best Harry and Meghan lookalikes in Europe competition last year. I’m hoping I have saved the best until last!