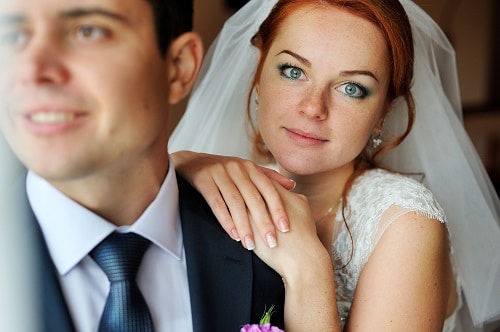 You’re a redhead, and you’ve just got engaged! Hurrah! Everything is lovely and excitement ensues. Being a somewhat proud redhead, and seeing as your wedding day is your day and is all about you, you naturally want your precious red hair to be burning bright and glorious as ever, right?

But for one particular ginger bride, these wishes were not heard…by her own future mother-in-law.

The Reddit user posted on a thread titled ‘JNMIL wants me to dye my (naturally red) hair for our wedding so she can be the only (cheaply dyed fake) redhead in wedding pictures’ followed by a slew of text messages she received from her fiancé’s mother, who was trying to convince her to change her hair colour before the wedding.

The bride-to-be posted: “MIL texted me this weekend asking what I planned on doing to my hair for our upcoming fall 2019 wedding. I sent her back a few hairstyle photos I had saved from Pinterest as inspiration. Conversation went downhill from there.”

In response to the Pinterest photos, her future mother-in-law replied: “No I meant the color! What are you going to do about the color of your hair.”

The bride answered: “Nothing? This is my natural color and I’ve never altered it chemically. If I ever desire to do so it certainly won’t be right before the most photographed day of my life.”

To which the mother-in-law wrote back: “Don’t you think people will think it’s weird you have the same hair color as [your husband]’s mother? I just don’t want you having to explain it to your family that we match.”

“I don’t think anyone is thinking that,” the bride replied. “My whole family has natural red hair and it’s just coincidence that you have yours dyed a color in the same color family.”

Two days then passed before the bride received a reply from her fiancé’s mother. “I’m still upset you’re not listening to me about your hair color. I really don’t want anyone judging us for matching. Please reconsider. It makes me uncomfortable that you’d be willing to keep the same color as me when you’re marrying my son.”

To which, the bride-to-be commented on her original Reddit post: “Is she really implying her son is somehow going to be sexually attracted to her because we have the same hair?”

The mother-in-law continued: “I want you to have all the attention you deserve on your big day. I’m looking out for you and don’t want anyone feeling uncomfortable that the mother of the groom and bride look alike.”

The bride answered: “I’m confident our hair color won’t be on anyone’s mind during the reception. I’m proud to come from a family of all redheads and I think it’s great you blend in with us as well!

“Our outfits will be completely different and I don’t think it’s awkward for anyone!”

But the mother-in-law went a step further with her reasoning. She said: “I have had this hair color since I survived chemo in 2013. I am proud to have my red hair because there was a point in my life where I didn’t even know if I was going to be alive for my son’s wedding let alone have hair for it!!”

Struck by her fiancé’s mother’s reaction, the bride worried that she’d implied that the mother-in-law should dye her hair. She replied: “I don’t recall ever saying you shouldn’t have red hair at our wedding. Did someone else give you the idea that I want you to dye your hair? I’d love to help you pick out the perfect dress to compliment your red survivor hair that you’re so proud of! I know we both look good in green and blue!”

But her mother-in-law said: “It was implied that one of us has to dye it but since your [sic] not budging, you think it should be me and I worked so hard for my hair it’s not fair. You can’t do this to me.”

Almost at her wit’s end, the oh-so patient bride replied: “The more redheads, the merrier in my opinion! Please don’t let anyone tell you that you should change your hair color and I’ll follow the same advice!

“Us redheads will stick together and probably outnumber the non redheads at the family tables! [Your son] and I certainly aren’t worried so I wouldn’t spend another minute of your time worrying either.”

The saga took another turn, with the mother-in-law citing the couple’s recent move across the country to be a point of contention with the mother-in-law. She said: “Well that’s easy for you to say when you live far away and choose not to spend time with me or my family anymore but I have to be here and answer to everyone that is upset we have the same hair color.”

So what’s the real issue here? Who knows.

Regarding the hair colour though, unless the mother-in-law also plans to wear a big white dress at the wedding, we wholeheartedly agree with the bride here.

The more redheads the merrier!