As a child, you may feel like having red hair as bright as a beacon is a bad thing. But as an adult, this generally changes, as you realise the individuality (and overall awesomeness) your ginger hair offers to you.

Nina Baker, musician and singer extraordinaire, realises that her career is partly down to her determination as a redhead to succeed. Everyone saw what we meant at Redhead Day UK on Saturday 12th September, where she headlined the event and won a MOGO (Music of Ginger Origin) Award, too! 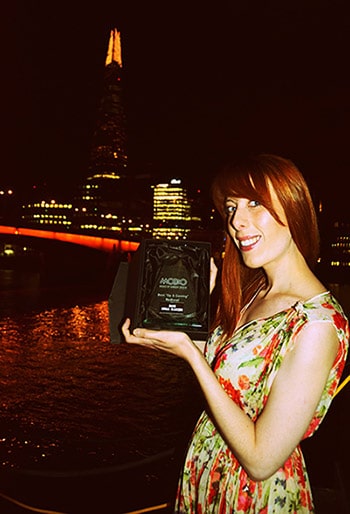 Congrats on your MOGO Award! How does it feel to win 2015’s Up & Coming category?

Obviously I’m thrilled! It is always great to get praise and accolades but it means just that little bit more when it’s from your peers.

Redheads form less than 2% of the world’s population, which instantly makes us the most precious, so to be chosen amongst that pool makes it super special and the rarest of the musical awards.

Why do we need the MOGO Awards?

Just like the MOBOs, or the County Music Awards or the Classic FM Awards, there is certainly ‘ginger music’. Don’t laugh, I’m serious!

Look at the artists who have been in the MOGOs: Sheeran, Nash, Faith, Faulkner, Amos, Gartland, Baker, Welch, Decker; they are all a little “different” and some are a little “out there”

That is what we are all about, we are different, we are non-conformists, we set trends and we don’t follow them.

How did you start out singing?

My grandmother, also known as ‘Teapot’, was a tremendous singer and she bought me my first piano, so she is certainly my main influence. I started out in musical theatre at 7, started learning piano at 14, went through all the grades, wrote a few songs and that leads us to today. So thank you, Teapot!

Like Kate Bush and Alanis Morissette having a fight! Piano-led classical pop that bridges into rock, swing & jazz.
What is your musical inspiration?

Apart from ‘Teapot’, I was brought up on jazz and swing from my other grandparents and rock from my parents, so my early influences were the likes of Fitzgerald, Simone, Sinatra together with Queen, Led Zeppelin and Pink Floyd. A lot of this comes through in my album; it is simply a collection of styles that I grew up with, with me up front with a piano.
Have you always been proud of your red hair?

Yes, immensely. I’m also proud to be very pale – there is a beauty to being pasty! I tried a spray tan once and it had NO affect. We are immune to them!

I grew up in Norfolk in the 90s, where difference was not a good thing. My parents came up from London so I spoke and looked different to the others, so I was a bit of an outsider. Not bullied, but not fully accepted either, which was fine by me as it enabled me to do the things that I wanted to do, which is the greatest thing that anyone can learn: how to be themselves.

Are there any other members of your family with red hair?

Both my sister and I are ginger, but neither of my parents are. I think it skipped a couple of generations and harks back to my Irish ancestors.

It has always been my calling card; I have always been known as the ginger pianist. My hair colour is definitely a reflection of who I am: warm but occasionally fiery. I’m an English Rose who can be incredibly thorny if handled incorrectly.
What’s your best haircare tip to your fellow gingers?

I’m a big fan of Schwarzkopf products. I’ve tried many brands but have found that most shampoos and conditioners don’t do much to help keep my hair silky soft. As a redhead my hair has a natural tendency to get very dry so my top tip to help this has to be Schwarzkopf Bonacure Moisture Kick. After a good shampoo and deep conditioner, add a touch of this and you’ll see the results. 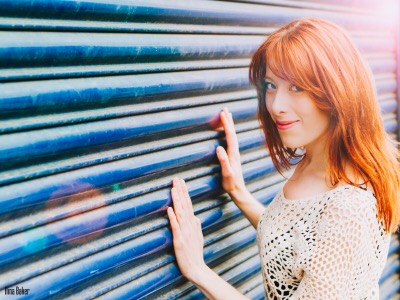 Your difference is your advantage. I was always different at school, the outsider, but this meant that I went my own way long before the rest of them, so I had a head start over them. I decided to do something deeply uncool such as learning the piano, now those same people get in touch with me saying how much they admire me. Know who you are, learn what you can do and show the world.

It gets you 15% discount at Nandos. That may not be true. I don’t even like Nandos. But I do know that you can wear the colour green and look incredible.

Have you ever written a song about your red hair?

Not directly, but all of my songs relate to something that has happened to me, so if you take time to listen to the lyrics you will see that there are messages of defiance, non-conformance and self-belief in there. 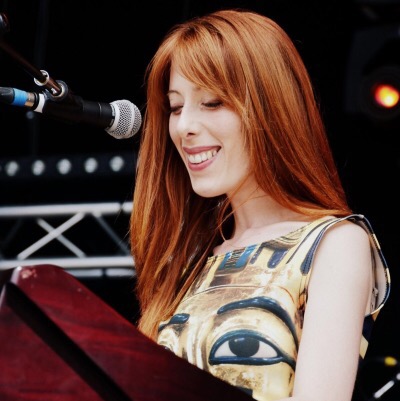 Which ginger artist would you like to collaborate with? Why?

I’m still waiting for the call from the little lad from Suffolk, Ed Sheeran. He was breaking through just as I was starting in East Anglia. I think a Sheeran-Baker collaboration would be tremendous; him on guitar, me on the piano, it could be a ballad or something really kick-ass. Whatever, it would be a lot of fun with lots of energy.

How did you find Redhead Day UK?

It was a fabulous day from start to finish. I don’t think I have ever seen so many ginger people in the flesh in all my years. I met a lot of people, enjoyed going around the stalls and my set went down really well.

I can see Redhead Day UK going from strength to strength. The momentum is there, it received a lot of press attention and will almost certainly be bigger and better next year. Though surely we need to find somewhere to hold it with ‘Red’ in the title, like Redruth, Redcar, Redhill, Redditch or if we bend the rules a little, Reading!

What was your personal highlight of RHDUK?

There were a few. Performing “Single Bed” with the crowd cheering along – that was fun.

Also, there was a little boy in the courtyard who when he saw me drag me stage piano into the venue said “Mummy, that lady has a surf board” – that was hilarious!

What’s next for Nina Baker?

I have some new music videos being worked on which should see the light of day before Christmas. I am currently writing new material and planning to hit the road hard in the new year, so keep an eye on my website for dates near you.

Please follow me on Twitter and Facebook – I have been known to be quite funny and I try and let people into my world and involve them in it as much as I can. If you like music, tea or cake then you will find something of interest on my streams!