Night of the Walking Red: Ginger City Comes To The USA, 1 October

Night of the Walking Red: Ginger City Comes To The USA, 1 October

Red hair is so rare at less than 2% of the world’s population, that sometimes, depending on where you are, you may spot a fellow redhead only once a day. And, for us, that makes us a bit sad.

So, when ginger gatherings occur, we get a bit overexcited. Especially when the words ‘Ginger City’ are uttered.

Because, fellow redheads, that’s about to happen in the city of Troy in New York, USA. 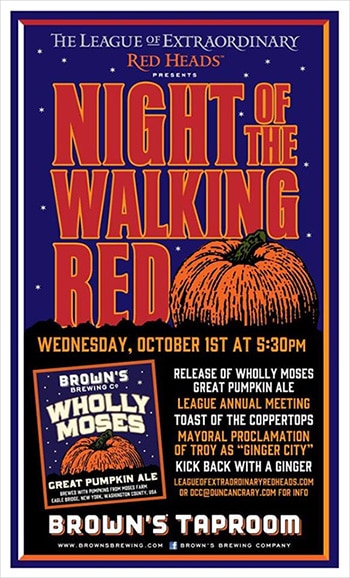 On 1st October 2014, Troy will morph into ‘Ginger City’ for the day. The event is so official that the Mayor has proclaimed the city’s name change for a full 24-hour period.

Organised by The League of Extraordinary Red Heads, the flame-haired event kicks off at 5.30pm and will mark the second annual ‘Night of the Walking Red’, taking place once again at Brown’s Brewing Company, where the ‘Toast of Coppertops’ will commence.

This high honour involves members of The League of Extraordinary Red Heads raising glasses of locally crafted pumpkin ale from the first batch of the season.

Also, as is the League’s custom at their gingerific meetings, members will discuss the items on their concise meeting agenda: “1) Us. 2) Them.”

Brains behind the League, Duncan Crary, said: “Because we always stand out, red heads can never hide in a crowd or at the back of the classroom.”

“So we learn to have fun under scrutiny. Some people call that being ‘fiery’, and we do tend to be an excitable bunch. That may be the reason why so many prominent figures in history have had crimson locks.”

The flaming excitement doesn’t end there, though. One downtown hotel, Franklin Square Inn and Suites, is offering a special $99 room rate for ginger travelers on 1st October, who should ask for the Red Head Rate when making a reservation.

Also, several local businesses have agreed to provide Ginger Discounts to those holding League of Extraordinary Red Heads membership cards, which are handed out for free during League events.

Many more ginger treats will be added to the bill closer to the time, including a special ginger and pumpkin themed menu at Brown’s Brewing Co. 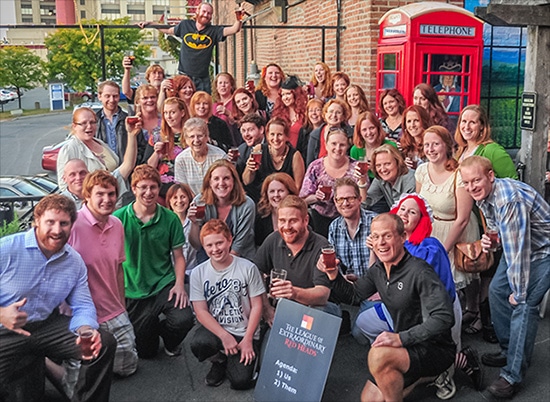 The group originally formed back in January 2013, and has hosted several meetings in the New York area since then, with one featuring a screening of Scott Harris’ documentary Being Ginger, and has since been ranked number 7 in the list of ‘Best Redheaded Gatherings of 2013‘ on Buzzfeed.

For more information on Ginger City and the Night of the Walking Red, join the League of the Extraordinary Red Heads‘ event on Facebook.