At the Gilded Balloon in Edinburgh on 3rd August 2013, I saw a comedic performance by Diane Spencer, which was a hell of a lot funnier than the pun I made in the title of this article, I’m pleased to say. 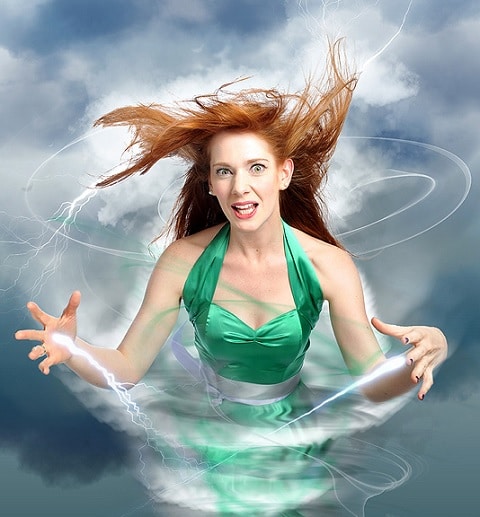 Walking into a comedy show late is absolute suicide, you get ripped by the comic, it’s so embarrassing. It was an exhilarating moment. I blame Google maps for the whole debaucle, silly thing.

We were five minutes late, and if the rest of the show was anything to go by, I kick myself for missing them.

Diane Spencer: ginger, sequin-clad and greatly concerned with society’s misinterpretations of what sexism actually is, spent that hour perched on a makeshift roof, explaining how she’s convinced that she’s unlovable, while discussing her, ahem,  “meat curtains” and her daily battle with experimental sexual urges. Then she’ll throw in a pun delivered in her mum’s Dorset accent.

She may look sweet and innocent, with her gloriously ginger hair pinned up pompadour style on a stage with white cotton wool clouds behind her, but don’t believe it; it’s just a clever ruse.

That girl will start chatting about role play sex and cystitis, and you won’t know whether to gasp in embarrassment or piddle your panties with laughter (it’s actually one then the other).

But mostly, you don’t feel like she’s just being rude to ‘keep up’ with the men in comedy nowadays. She’s not just spewing out F-words and discussing her vagina to prove that women can be potty in the mouth too.

Stand-up comedy to the audience is entertainment, but to the comic, it’s therapy. She’s just got some things to get off her chest, and she wants to make you laugh while she does it.

Female comics are all too often and all too quickly labelled as providing comedy ‘only for women’, but you really don’t need to relate to Diane’s problems to find them amusing.

She thinks she’s a hurricane, when really, she has a life that’s as colourful as a rainbow, and we can all stop to watch it when it happens. (Only people who have seen this show will get that reference, so do yo’selves a favour and go, yeah?!)

Diane Spencer’s show, ‘Hurricane Diane’, will be running in The Wee Room at the Gilded Balloon for the rest of the Edinburgh Fringe Festival, till 26th August. Visit www.difunny.com for more info.