Throughout literature and cinema, we’ve been treated to our fair share of strange and conflicted relationships. Whether we’re battling the Nazis, sinking ships, or the full freaking force of the armies of Mordor, we like seeing our favourite characters go through some extreme circumstances for true love.

Or, maybe some gents are just battling some really messed up personalities (I’m looking at you, Scarlett O’Hara. You may not be scarlet by head, but you sure as hell are by nature, sweetheart.) Let’s be honest, all of these people are a little bit unhinged upstairs. Who wants to watch a film about normal people?

Ah, but there’s the thing. Crazy, Stupid, Love is a film about some genuinely sane and mostly intelligent people. Cal (Steve Carell) is a forty-something man on the edge of divorce from his wife, Emily, played by freckled femme fatale, Julianne Moore. 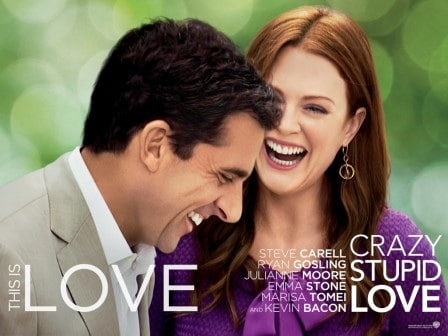 Okay, it sounds nice when you put it like that. But some of the things this guy comes out with are definitely sexist, womanising and borderline sex pest. And all the slow motion walking and pizza-eating in the world won’t make you think this guy would be nice enough to bring home to your Nanna.

That is, until he meets Emma Stone’s sassy red-haired lawyer, Hannah, a girl who can see through him like he’s Casper. Finally, a woman who doesn’t jump into bed with him with one crook of a well-pruned eyebrow. 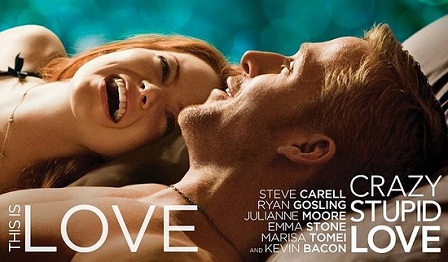 Yeeeeah, it’s a scientifically proven fact that ginger ladies can resist Ryan Gosling, HOLLAHHHHH. (Okay, that is a generalisation based only on this film, and has no actual evidence to support it. However, Ginger Parrot is willing to participate in that particular experiment if the Gosmeister is…)

Ryan Gosling aside, this film is a well-written web of many types of love. It’s first love; from its honey-sweet beginnings of unrequited and forbidden longing, to its worn-out foundations crumbling from time and infirmity, to the reclamation of lost youth and the affection that abandoned you with it. Then there’s the love that sneaks up and hits you when you were looking in the other direction.

But most of all, it’s about the fact that no matter how rational or able the brain in question is, heart always wins in that age-old battle, making us crazy and stupid and suddenly it feels like we’re all battling the proverbial dark lord Sauron in order to get our love lives where we want them. Also, it really is quite amusing. Watch out for Hannah’s best mate, though, she makes some cracks about Conan O’Brien which some gingers might find offensive.

The ensemble cast is incredible. Stone and Moore are strong, funny and, not surprisingly enough, their ginger hair looks incredible. Not that we’re biased or anything.

Carell is hapless and hilarious, there’s a great performance from Jonah Bobo as Cal and Emily’s puppy-lovestruck son, and well, Gosling is…Gosling.

But even Marisa Tomei, Kevin Bacon and some cheeky snippets of Josh Groban’s movie debut all add to this effective cast.

The words and wisdom of strong scripting and lovable characters win in this venture. Love is crazy, and it’s stupid. But hey, what are we going to do about it?

Make a funny film about it, and cast some cool-ass gingers plus Ryan Gosling. No complaints here.

And if we’ve not painted enough of a picture for you, check out the hilarious promo at the top of the page.