The real-life Princess Merida has been found!

The real-life Princess Merida has been found!

The real-life version of Princess Merida has been found! Rejoice!

Everyone give a warm ginger welcome to 15-year-old Caitlin Boyd, from Angus, Scotland, complete with big blue eyes and wacky red hair.

Last month, Sunday Mail launched an international competition to find the real-life Merida, who would be rewarded with jewels and riches (not quite, she would get to go to the European premiere of Brave).

And luckily for Caitlin, she will be joined by three of her friends on 30th June at the premiere, which will mark the closing of the Edinburgh International Film Festival.

She said: “Ever since the first Brave trailer came out, everyone has been saying how much I looked like Merida. So when I saw the competition, I thought I would enter.

“I still can’t believe I’ve won and can’t wait to go to the premiere. I’m really proud to be Scotland’s real-life warrior princess.”

Caitlin’s mum said: “It’s like Disney have created an animated version of my daughter. It’s incredible. I can’t wait to see the movie.” 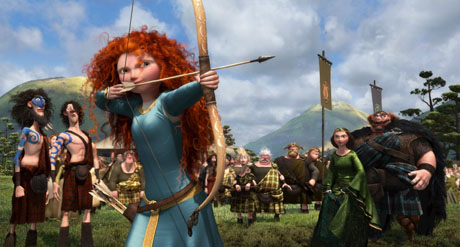 The Pixar movie follows Merida, warrior princess and reluctant heir to the throne. She’s full of gumption, and we just know we’re going to love watching her revolt against social expectations with her wild, flame-coloured hair.

There’s much to be said about her signature hair, which we’re sure will be copied in no time (check out our step-by-step guide). Pixar felt that attention needed to be paid to Merida’s mane, so much so that they even created new software for the challenge!

Voices of Brave include Kelly Macdonald, Billy Connolly and Robbie Coltrane. It is already released in the US, with lucky old UK having to wait until general release in August. (It’ll be worth it though!) You can watch the trailer here.

Previous Article
How to Get Red Hair Like Princess Merida!
Next Article
Ginger of the Month: July

On DVD: The Adventures of Tintin
Ginger Parrot April 18, 2012

On DVD: The Adventures of Tintin