Join your fellow ginger kin for an evening of debunked redhead myths this November, as stand-up comedian James Wilson-Taylor pledges to end the plight of gingers in 2016 in ‘Ginger Is The New Black‘. Detailing the history of the redhead, Wilson-Taylor hilariously mocks the stereotypes of redheads during his one-man show, putting it all to music. 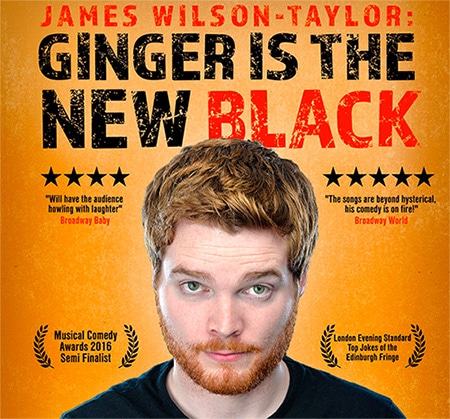 Hitting London’s Leicester Square Theatre on 1-5 November, Ginger Is The New Black is coming from its successful stint at this year’s Edinburgh Fringe, where it received four and five star reviews.

We caught up with the man himself, ahead of moving ‘Ginger Is The Black’ to the south…

How did you think up your new show, and why did you decide to do it?

My last two shows were about specific fictional characters – Doctor Who and Batman – so I wanted to try something different to broaden things out. Then I realised I had the perfect topic right in front of me. There are so many stereotypes, stories and celebs that I could probably write three shows about being ginger.

How’s it going so far?

It’s been great, looking forward to taking it around the country and spreading the revolution!

How was performing at Edinburgh Fringe?

I love playing at Edinburgh and we had a particularly great run this year – I actually went out flyering with free jaffa cakes for all gingers. Seemed to work a treat.

What’s been people’s reactions to the show so far?

Audiences and reviews were all really positive. It’s a really fun show with a fair bit of participation so the crowds would get on board quite quickly.

Are you finding that most of your audience are redheads?

Obviously you get a fair amount turning up but it’s actually quite a mix. If you’re into musical comedy and stand-up you’ll get a kick out of the show. All hair colours are welcome.

I grew up in Scotland so we certainly weren’t a minority. And I’m a performer so it’s not like I care too much about standing out anyway.

Do other members of your family have red hair?

Just me and my Mum.

Well the show focuses on debunking all the stereotypes around being ginger so I don’t think it makes you more “fiery”, for example. But maybe, in a weird way, it forces you to be more outgoing because you’re in a unique club.

When I was a kid I just used to fire back insults – I had too quick of a mouth. I guess my advice is just to remember that anyone mocking you has a really small brain capacity.

Then do a fringe show to vent your anger.

My beard comes out looking pretty good I reckon.

After London, I’m touring the show through most of next year. Then I have a couple of ideas for the next one but I’ll save those till 2018.

Just that they should come and see the show. We can grab a Crabbie’s after and swap stories.

And, great news for redheads! Natural gingers can get in for free, as long as they bring a non-ginger pal with them to see the show. Quote the word ‘ginger’ at the box office and you’re sorted. Here’s a little message from James.

A special message to the gingers of London – come see me @lsqtheatre Nov 1-5th for FREE! https://t.co/vq2kyxO7Dx pic.twitter.com/P0mEWJbSlU

Tickets are available from the Leicester Square Theatre website

Diane Spencer Comedy: She Made Me Di Laughing…
Lizzie August 9, 2013