Ever since Stranger Things shot to cult levels of popularity in 2016, Shannon Purser has rightly claimed her position as the ultimate icon and role model for redheads. Playing Barb in the cult Netflix series and then Ethel Muggs in Riverdale, Shannon continues to empowers gingers of all ages to be proud of their red hair.

We chatted with her about her love of being a redhead, her adoration of The Little Mermaid, and her top foundation recommendation for pale skin.

I like that it’s such a rarity! It makes me feel special.

Do you believe that your hair colour contributes to your personality?

I’ve never really thought about it. I have heard that redheads are especially fiery, and I guess that’s been true for the most part!

What was your experience growing up with red hair?

Mostly, growing up with red hair was just fine! Every now and then, someone would joke that I had no soul, but they never said it to hurt me.

Have you always been proud of your hair colour?

I think there have been times when I wanted to change it, but overall I’ve really liked my hair.

I have heard that redheads are especially fiery, and I guess that’s been true for the most part!

How do you feel about being called ‘ginger’? Do you think it should be used interchangeably with ‘redhead’, or is that something different?

I think ginger is probably a bit more accurate than redhead when it comes to my hair. But most people use them interchangeably, which I don’t mind.

Do you have any family members with red hair?

Yes, my dad and one of my sisters both have red hair.

Have you ever dyed your hair to another shade? If so, how did you feel about losing your red colour?

I have temporarily dyed my hair before, but I never bleached it and the color never lasted too long. It was fun to have a change but I would miss my red hair after too long.

Do you find that your hair shade has changed over the years?

I don’t think it has changed too much! 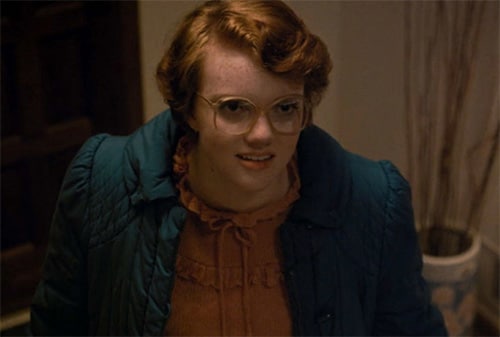 You’ve become quite the ginger icon since your appearances in Stranger Things and Riverdale – would you say that you’ve felt increased ginger love since these roles?

It is cool to meet other redheads who love the show. I think some of them are really happy to have someone to cosplay now! There aren’t very many red-haired characters in comparison to other colors.

What advice would you give to redheads who are being bullied?

Always wear sunscreen! It’s worth it to not get burned or get sun damage.

Probably Molly Ringwald. She’s such an icon and starred in some of my favorite movies of all time. Or maybe The Little Mermaid. She was my favorite Disney princess when I was a kid.

What’s your best make-up and skincare tip for redheads?

I don’t always follow this advice as well as I should, but always wear sunscreen! It’s worth it to not get burned or get sun damage. Also, finding a good foundation that isn’t too orange is hard for redheads. I recommend MAC.

And what’s your best haircare tip?

Don’t shampoo too much or your hair will get dry and lose its lustre.

Do you think having red hair has contributed to your success and career?

I don’t know! Maybe. Sometimes being a little different helps!

Do you feel that there’s a shift of attitudes towards red hair in society nowadays?

I think for the most part, red hair is considered beautiful nowadays.

Natural gingers are the best!

What do you think needs to be done to reverse the negativity surrounding red hair?

Like with anything, it just helps to have more people with red hair in the public eye, to show that it’s normal and beautiful.

Right now, my new show Rise is airing on NBC! Netflix bought my movie Sierra Burgess is a Loser, so look for that this fall.

Previous Article
The best ginger comebacks for redheads
Next Article
Ginger Junior of the Month: April 2018