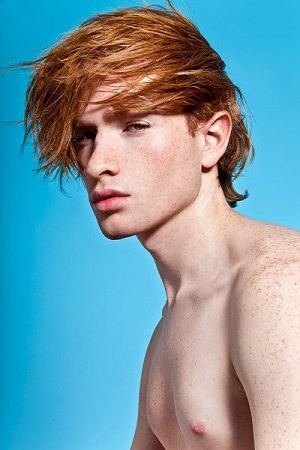 As much as we believe that standing out from the crowd is the best part about being ginger, it can create the opposite feeling at times, especially when growing up and dealing with bullying and school ground taunts.

And even as we mature, stereotypes still follow redheads around: for women, they are viewed as mythical, ‘sexy’ creatures; but for men, ugly and ‘geeky’ ideologies are used throughout popular press.

Red-haired photographer Thomas Knights is about to change all that, with his London exhibition, ‘Red Hot’. Featuring semi-naked ginger men (calm down), Thomas wants to challenge the widespread view that redheaded men are unattractive.

We spoke to Thomas about Red Hot, and how he hopes for the exhibition to change people’s viewpoint on ginger men and make them realise that they can be (and are) hot!

Tell us about the Red Hot exhibition…

Red Hot is a showcase of good-looking, alpha male type redheaded men. It aims to dispel the popular preconception that ginger men are somehow less attractive and weaker than their brunette or blonde counterparts.

How did you come up with the idea for Red Hot?

Being a redheaded male myself it’s close to my heart and a very personal project. It amazed me how our western culture holds redheaded women to such high regard, almost the ‘ultimate’ female, and redheaded males in such low esteem; emasculated and desexualised in film, TV and literature.

I don’t think any other hair colour has this polarised opinion between genders. If you think about it, there are no Hollywood leading men with ginger hair, and no male ginger superheros or action stars. We have been conditioned to think ginger men are ugly and weak.

I wanted to flip this stereotype on its head and present the redheaded male as the ‘ultimate’ alpha male. Essentially, ginger boys desperately needed a rebrand and I felt like I was in a good position to do it.

What do you aim to achieve with Red Hot?

First and foremost, I really want people to have a great time, and feel flustered by all the hot ginger men staring at them from the walls.

But I ultimately want them to go away with a mind shift. I want them to consider their own institutionalised, conditioned restrictions on what is a sexy or hot male.

I’ve found that some people are surprised that hot ginger guys exist. Some whisper “Well I’ve always had a fetish for ginger boys” as if it’s something to be ashamed of.

I would love to create a conversion; to make a difference to the kid at school being bullied for the colour of his hair. I would love for him to be proud of it, right now, and stop him having to go on the same journey of self-confidence that many ginger guys go though. That would be an achievement. 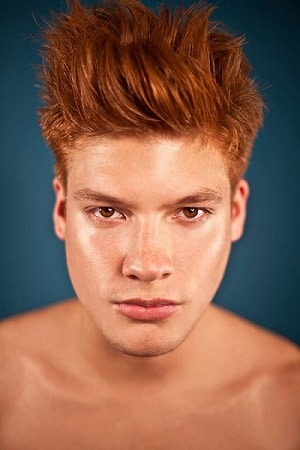 Do you believe that there’s unfair press surrounding redheaded men that needs correcting?

Think how few Hollywood leading men there are who are proudly ginger? Are there even roles for them? How often do you see the nerd, loser or fat kid in a TV show played by a ginger guy?

It’s very rare to have a ginger hero, I can’t even think of any, whereas for redheaded females in Hollywood, it’s a totally different story. It’s filled with beautiful or sexy red-haired females – they are the ultimate women.

I want to present redheaded men as the ultimate men, the alpha male, the leading man. I want people to be aware that it’s even possible!

Why do you think there is so much unfair press towards ginger men?

It’s been so institutionalised. People aren’t aware that ‘hot’ ginger guys exist. I think Damian Lewis and Prince Harry are breaking this mold and I give credit to them. Especially Damian – I can imagine the conversation with the producers as to whether he should dye his hair brown before filming Homeland… but now that’s his ‘thing’ and he is literally the only leading man in Hollywood with noticeably ginger hair.

What do you believe redheads should celebrate about themselves?

Many of the Red Hot models dyed their hair blonde or brown, even black. Some also wore fake tan to conceal who they were. They all agree that their natural hair colour and pale skin colouring suits them much better now and they are proud to be different.

This is a personal journey that can take up to ten years or more, but now, they are very proud and love the fact they are different from the norm. If only all redheads could feel like this from the start!

But kids can be so horrible at school to anyone deemed different.

Which models/actors have you got involved with the exhibition so far?

I have shot pretty much every ginger model in London! I’m now shooting some high profile sport stars but ultimately I would love to shoot Damian Lewis!

Where and when can we see this glorious ginger exhibition?

For the chance for the exhibition to go global, donate to Thomas Knights’ Kickstarter campaign.

For updates from the Red Hot exhibition, including photos, content and news, check out their Facebook page.

The fun doesn’t end there. You can now get your mitts on the RED HOT collection in the form of Portrait (and Sexy!) 2014 calendars, Christmas cards, and T-shirts. Only available online at the Ginger Parrot Store.