We’re all only too excited that Brave will be released later this month, but here is an intriguing insight into how the wonderful animators at Pixar created Princess Merida’s untamed red locks. 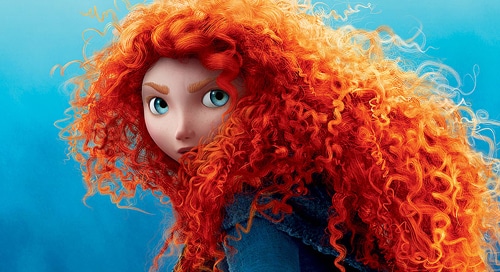 Any animator will tell you how important it is to understand the natural movements of the object (or person) you are recreating; and if this is off the mark by just an inch, you run the risk of losing the viewer’s full focus and attention.

It’s all very techy, and if I’m honest, this is where my brain goes a bit mushy and thinks, “Nu-huh, no more info is going in here,” and folds its arms like a stroppy child.

But Claudia Chung, the simulation supervisor for the film, explains it well: “[Viewers] have this sense when it actually doesn’t move right. When it looks strange, a little bit floaty or weird, the audience can pop out of the story.” I see.

So with hair like Princess Merida’s, it’s understandable that the chiefs at Pixar HQ were a little antsy, wanting to get her ginger mane spot on (too right).

In fact, the company felt her hair is so intrepid to the storyline, that they created a set of new software for it.

Steve May, Pixar’s chief technology officer, and a supervising technical director on Brave, said: “Merida has curly, long, and expressive hair. It’s important, and a reflection of her character.”

You don’t need to tell us gingers that our hair is important. We know only too well!

Brave is set to be released at the end of June 2012; you can watch the official trailer here.