As predicted by our team of experienced analysts (AKA Ginger Parrot Team), ginger hair climbed higher and higher up the tree of awesomeness throughout 2014.

Red hair continues to proves to the world that being different and standing out from the crowd is something to be seriously proud of, and is now celebrated more than ever. And it’s all thanks to a tiny mutation in our genetics.

So, ladies and gentlemen, redheads and ginger lovers, without further ado, here is our list of the top ten ginger hairstyles of 2014…

It made us laugh, cry and gave us envy as J-Chassy became J-Sassy with a ginger pixie crop that was so cute that James McAvoy just HAD to pass a cheeky love note during class for “the girl with the red hair”.

She’s trussed up in a lilac, rainbow patterned suit and has a guitar to match, and this year released her first album in six years, and it was something special.

With her long red hair, this year Jenny Lewis proved to us that gingers really CAN wear ANY colour and look like a rock star.

Yeah, she’s had a rough few years. Forced into marriage, constant harassment from her ex fiancé/evil king and most of her family is dead, but hey, at least Sansa’s ginger hair still looks FABULOUSLY AND FLAWLESSLY FIERCE.

You go, Sansa, you’re a hairspiration to us all.

So, you know how when Friends started, people went into the hairdressers and said, “Fabio, fetch your rollers. I want a Rachel”?

Well, next year people will say, “Fabio, fetch the straighteners and red hair dye, I want a Bryce Dallas Howard.”

A brand new trailer for Jurassic World was released this year, and it revealed BDH with a straight ginger bob with a full fringe, heading up the running of the dinosaur park.

Well, I know most of you aren’t actually looking too closely at their hair, but trust me, it’s just as hot as the heads it’s sitting on top of.

Evangeline Lilly – The Hobbit: The Battle of the Five Armies

Another year, another Middle Earth movie. And 2014 had another adventure with Tauriel, the she-elf with archery skills and a dwarf boyfriend.

And much like Legolas, she manages to keep her mane sleek and shiny even in the face of dragon fire and Orc armies. Now that is power.

So, she’s had her ups and downs this year (and by downs, I mean the blue pixie cut she had over summer) but don’t fret, she realised her mistake and came back to Team Ginger.

Another great short ginger cut arrived on the head of Emma Stone this year, who is forever our favourite dyeing redhead of Hollywood and Broadway.

Photographer Annie Leibovitz took a series of glossy photos featuring Disney characters re-imagined, so natural ginger Jessica Chastain went all curlified, straddled a horse and fired her arrows as Princess Merida. We think you’ll all agree, it was PHENOMENAL.

Everyone at Redhead Days 2014 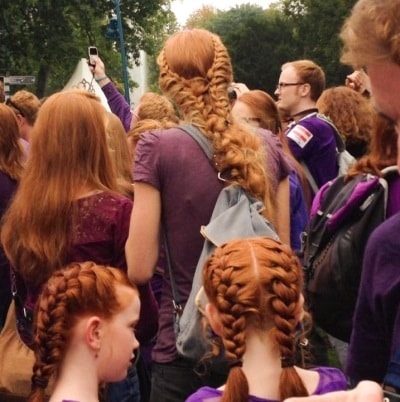 Never before have we seen such beautiful red hair than at the Netherlands Redhead Days event! From tiny ginger babies, to whole families of redheads, Roodharigendag is a weekend you’ll never forget.

More photos and videos of Redhead Days can be found here.

Whose ginger hair was your favourite for 2014?