You may have caught the episode of South Park during which gingers are highly discriminated for having ‘Gingervitis’: a disease which causes pale skin, red hair, and an intolerance of sunlight.

Or, you may have taken the high ground, and chosen not to watch it. Well done you. 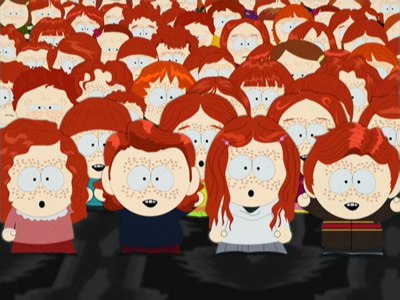 But since the controversial episode, such a thing as ‘Kick A Ginger Day’ has been bumbling around, which, quite frankly, I don’t need to explain. Its creator gets zero out of ten for the imaginative name.

And on 20th October, which was its, erm, official date, students at a school in Northern England took it too far.

Six red-haired children at Wingfield Academy in Rotherham were reported to have suffered bruises at the hand of fellow students, who cited ‘Kick A Ginger Day’ as a reason for doing it.

One mother said: “My son rang me and said kids were kicking him, saying it was National Kick a Ginger Kid Day. He was scared so I went to get him out of school.”

But despite the school releasing a statement that minor injuries were suffered by a ‘small number’, the issue goes further than this.

Eastenders actress and natural redhead Patsy Palmer spoke out on LBC Radio this week about her experience growing up with ginger hair.

She said: “I used to get bullied. They used to call me names for being ginger, they used to pull my hair, hit me over the head and hit me with bags and that is when you are eight, nine years old.

“I went into therapy actually, it was quite a big thing, all about the colour of my hair, and I cut my hair off, I dyed my hair.”

Patsy said that she still receives abuse now, at 41 years old: “The most abuse I get on Twitter is about being ginger and it’s really, really abusive sometimes – where I have had to report people, and they are adults.”

When asked by the radio show’s Iain Dale if an attack such as the ones at Wingfield was a “slightly weird form of racism”, she said: “I suppose it is, but you would never want to start talking about it like that and start opening a can of worms.”

On a lighter note, Patsy went on in the interview to urge natural gingers to “be proud” of their red hair: “I love my hair now. Any kids, just be really, really proud of it. And just be proud of yourself, don’t ever let bullies win.”

We couldn’t agree more. But a word of warning: there are rumours that 20th November will be another round of ‘Kick A Ginger Day’, so be on the lookout!

We would much rather it be Hug A Ginger Day.

What To Do When Henna-ing Your Hair Goes Wrong
Ginger Parrot November 29, 2021

What To Do When Henna-ing Your Hair Goes Wrong