Being that today marks Election Day in the US, it’s kind of apt that we’re telling you about touchy-subject-centred movie, Zero Dark Thirty, starring gingerfully fabulous Jessica Chastain, and dubbed, “the story of history’s greatest manhunt for the world’s most dangerous man”.

We like to think she’s the face of Ginger Justice, as J-Chassy herself stated on her Facebook page that she couldn’t reveal much about her character.

There’s a lot of secrecy shrouding the movie and its release date, which has been pushed back on a couple of occasions already over the past few months, to follow the US Elections and not tread on anyone’s tootsies. 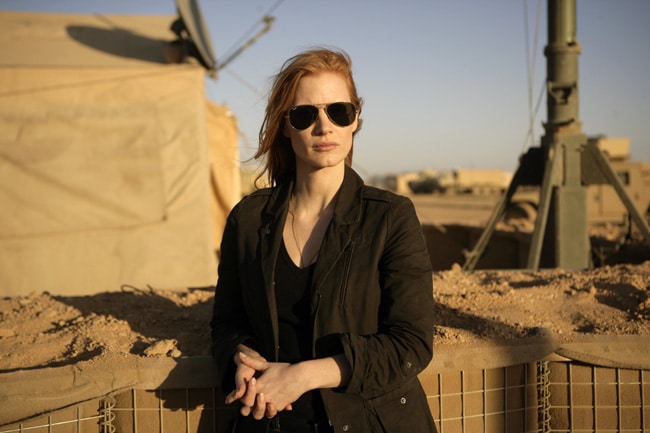 But, if you check out the trailer above, it’s pretty clear how the movie is going to go. And I mean this in a great way. I reckon Homeland and The Hurt Locker fans will love this thriller, which will relive the decade-long hunt for al-Qaeda terrorist leader Osama bin Laden, and his death at the hands of the Navy SEAL Team 6 in May, 2011.

The latest we’ve heard on the movie’s release date is January 2013.

That’s pretty much all we know right now. Oh and the fact that natural redhead Jessica Chastain looks damn good in Ray-Ban aviators, and we’re just about to pop out and buy some.

If you’re wondering what J-Chassy is currently up to; you can find her performing alongside Downton Abbey‘s Dan Stevens in The Heiress on Broadway, an adaptation of Henry James’ novel Washington Square.