My two ginger kids, Logan and Evelyn, take Taekwondo lessons. They both like it very much but my little redheads are different from each other and are extremely pronounced in their attitudes toward Taekwondo.

Logan takes his training very seriously. Evelyn doesn’t. Logan strives for perfection. And Evelyn, who is as hot-blooded as a redhead possibly can be (I’m sure you know what I mean), plays during class, doesn’t always pay attention to the instructor and giggles when she spars.

Yes, she’s the one that thinks getting punched and kicked while she punches and kicks is a totally laughable offence. The fact that she’s halfway to a black belt is both astonishing and absolutely terrifying. It’s astonishing that she can pay attention long enough to actually learn something, and terrifying because she’s mean. Yes, I said it. She’s a big meanie. She has a temper to rival Mel Gibson’s and she’s not afraid to show it.

When the kids in class are sparring, they are all required to wear protective gear (thanks heavens). The gear consists of a helmet with face guard, chest protector, and feet and hand protectors. All the kids look identical when they’re in full gear, with only their height and eyes to distinguish between them. 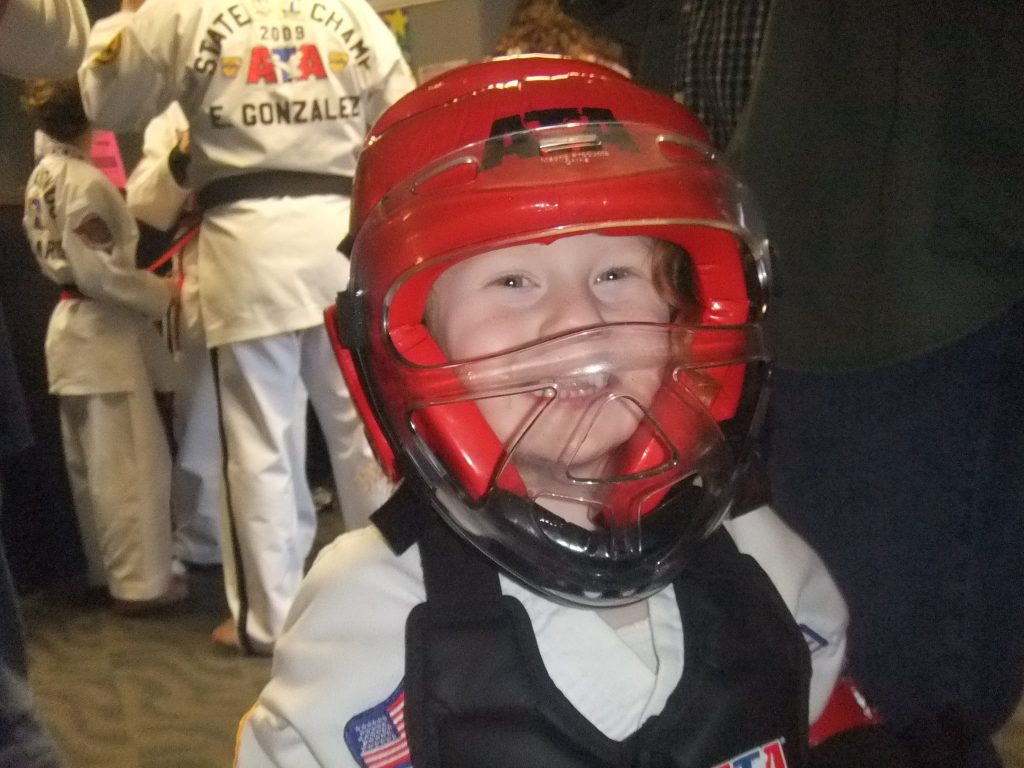 All of the kids except for Evelyn, that is. When she spars, I put her hair in a ponytail and pull the curly mess through a hole in the top of her padded helmet. I just love the fact that my babies don’t blend in with the crowd.

Well, I’m sure it’s hard to blend regardless of what you look like if you keep running to your mommy every 15 minutes asking her to feed you crisps through your face guard. Or if you cram your mouth full of fruit snacks right before class and run in looking like a little chipmunk half the time. Yes, that’s Evelyn, bless her. But in her defence, they can’t take food in the classroom and she’s always hungry.

When Evelyn’s in class, I sit out in the lobby because if she sees me watching her, she gets distracted and waves at me the entire time. I don’t miss out though. I can usually hear the instructors saying loudly, “Evelyn, pay attention!” or “Evelyn, get on your star!” or “Evelyn, keep your hands to yourself!”

A couple of times they had to send her out to talk to me and other times she was to be put in a time out. Yep, that’s my girl.

One time, she got her belt taken away because of bad behaviour. The instructor told her that if she could be good in class, he would give her belt back to her. It took her two weeks to earn it back. The funniest part is that it didn’t surprise me in the least. Her behaviour rarely embarrasses me. Maybe it’s because I live by the mantra “It is what it is.” Maybe it’s because I grew up with a ginger dad and a ginger sister (and a couple of ginger grandmas and random other relatives), and so I know how we operate.

So, where am I going with this? After a year of going to 45-minute Taekwondo lessons a few times per week, Evelyn will enrol in school in August. She’s manageable for short Taekwondo classes, I’ll give her that, but school isn’t short. It’s seven hours long, five days per week.

I keep imagining random scenarios involving my daughter on the first day of school. One of them starts with Evelyn walking into her classroom singing, “The party don’t start ’til I walk in”, because she does that at home!

I’m already mentally preparing myself for that first call from the principal letting me know that my daughter dropped the F-bomb on the playground. I have no doubt she’ll be that kid. The only time the principal ever called me about Logan was when he threw another kid’s lunch box on the roof of the school building. Logan’s not a bully, though, so that kid probably deserved it. Evelyn would’ve done it just for a laugh.

The truth is, I admire Evelyn for being herself even if that means that she doesn’t always play by the rules. Sometimes that’s necessary. I’ll just have to teach her that there’s a time and a place for breaking rules and that Mommy would be happier making fewer trips to the Principal’s office.

Tune in every week for a dose of mischief and hilarity from Diedra and her ginger family. Check out last week’s installment!