What’s that? Some Hollywood wunderkind decided, “Hey! Let’s stick Zac Efron ad Taylor Swift in a soppy movie together and see what happens!”

We’re not kidding. Yes, some Hollywood wunderkind has stuck Zac Efron and Taylor Swift in a movie together. But it’s not a coming-of-age high school musical (ha, see what I did there..?). And thankfully, it’s not really about either one of them. It’s a 3D animation from the makers of Despicable Me, about a knee-high furry creature called the Lorax, voiced by Danny Devito.

Wikipedia’s description of the movie is, “a grumpy yet charming orange creature with an amazing moustache.” Hmm, I think that’s proof enough that Wikipedia really can be edited by anyone. Someone with too much time on his or her hands,too. Bravo, you just made a funny on the Internet. 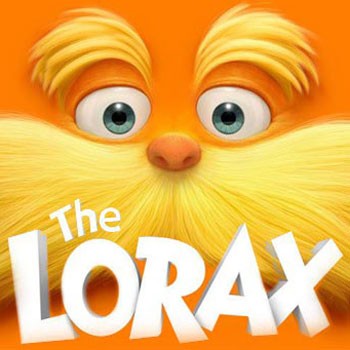 But really, the film is about a kid called Ted (Zac Efron) living in Thneedville (an entirely metal, plastic and synthetic town), and wants to impress his crush and find a real and proper tree. Then there’s this big hoo-har about why there are no real trees anyway and it’s all about deforestation and stuff.

Fun fact: elementary schools in the US actually banned this book when it was released. It’s like Footloose all over again, but with treehuggers.

Anyways, we’re dipping our finger in this particular pie because this little furry guy, the Lorax, is GINGER! And I don’t know if you’ve noticed, but we’ve kind of got a thing for gingers…

Also, Taylor Swift’s character, Audrey, Ted’s lady love, is a lovely shade of bright copper! She’s also a completely invented character for the sake of this movie, and is named after Seuss’ widow. N’awwww.

I must admit, the trailer (see above) does look like a 3D imagining of a night on LSD. But anyways, it’s out on 27th July, so just take any small child you can find and make them love trees. (you know that I mean a small child you actually know, right? Don’t go on a recreational kidnap or anything. It’s just a movie, jeez…)