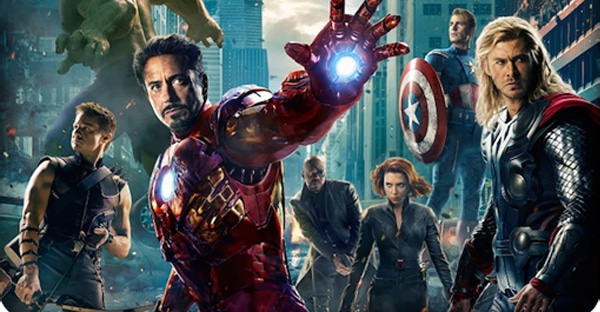 How long have we waited for this? Marvel have been concocting this plan in a dark attic somewhere for about 20 years, scheming world domination in the form of movies about amusingly dressed men with biceps like mangoes. Whom of which also happen to save our asses from bad guys every once in a while.

But many years ago (in a galaxy far, far away…oh wait, that’s not right…) we were told that The Avengers would one day grace our big screens, ostentatiously-clothed and defeating big-ass monsters to save planet Earth.

They really shouldn’t have said that. Every film just felt like a massive tease. It was like telling us that one day in a few years we’d be given a massive chocolate cake, and then once a year, they gave us a crumb: it tasted fine, but it made our mouths water, and left us incredibly unsatisfied.

I’m not seriously suggesting that I salivated at the idea of The Avengers movie (although, have you seen Chris Evans’ back? It’s literally like, pass the crackers…) but you get my point.

Anywho, the day FINALLY arrived. Captain America would wield his shield, Thor would clamour for the hammer, Hulk would grow and lose clothes and Iron Man would…well, make a sarky joke and steal the scene. Hawkeye would say not very much, but we’ve also got Black Widow, Scarlett Johansson’s uber-smart, insanely kick-ass, Russian spy, also named Natasha Romanoff. Oh and look, her hair just happens to be RED. Don’t mess with her; she’s got a brain like Stephen Hawking and a kick like a fat chick in heels. She also looks pretty damned hot in a black jumpsuit.

Together they make…well, the Council in the movie aren’t wrong: they describe them as a bunch of freaks. But, they happen to be a bunch of freaks who save New York City (and therefore, the world, obviously) from the malicious calculations of Thor’s half-brother Loki. If we’re completely honest, all of the evil deeds on Loki’s part are really because “Daddy didn’t love meeeee!” But hey, who’s really thinking about that stuff?

You may need facial reconstructive surgery after seeing this, because the action and graphics will melt your face. All of the parts are acted magnificently, too. Mark Ruffalo is an inspired choice to play Bruce Banner this time around: he’s such a relaxed actor, he’s practically asleep. But he played Banner with excellent inner confliction. Also, there are some hilarious scenes during the main battle when he is the Hulk, especially his little tiff with Loki. Samuel L. Jackson played Samuel L. Jackson, and you develop true love for a character who you will now know as “Phil.”

Is it everything we hoped it would be? In my opinion, I think it’s the best Marvel movie to date. These characters are strong as individuals in their own narratives, but put them in a room together, it’s like Hiroshima on New Year’s Eve in Rio: it’s all going down. They’re a rag-tag bunch of misfits fighting the good fight.

This story is not without its casualties, so try not to cry. Also, girls, try to take your eyes off Chris Hemsworth’s arms, which aren’t exactly hidden. There’s a beautiful moment during some discussion of a plan of action between the team, when the camera pans up, and conveniently enough, he’s forgotten his chainmail sleeves. Oof.

Sure, it’s no Oscar-winner. There’s no twisted plot; it’s not exactly The Tree of Life with unitards. But it’s a hell of a lot of fun. Movies about people with superhuman strength or look like multi-coloured cybermen can’t be too serious, can they?

Avengers Assemble is out now, but you can watch the trailer here.