So, the ‘superhero’ made its comeback a few years ago. And I don’t know about you, but I’m not entirely sure if I’m bored of them all yet.

Sure, I enjoyed the first Spider-man with Tobey Maguire. The second was very ‘meh’ and I fell asleep in the third one. But since then, we’ve had Kick-Ass, various X-Men, multiple Supermans, a Fantastic Four remake, Scott Pilgrim Vs The World, and do we dare even talk about Green Lantern? As flattering as your unitard was, Ryan Reynolds, it couldn’t distract us completely from what was really going on.

Our skies have become so crowded with caped crusaders, it’s a wonder they don’t all crash into each other.

But, this summer will be an exciting one. We’ve been building up to this moment for what feels like decades, because we’ll finally be getting all the Avengers assembled! So this film can only be called one thing (drum roll, please) ….Avengers Assemble! Those guys at Marvel are creative wizards. 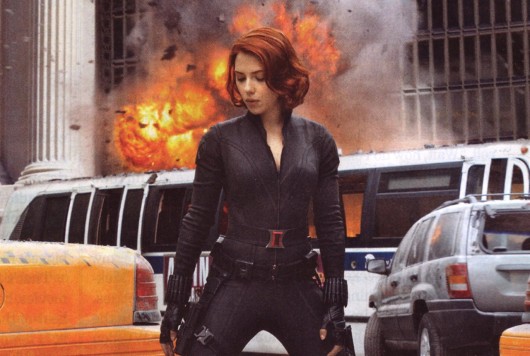 There are two kinds of superhero: there are the blessed ones, like Thor, or Wolverine. They’re superhuman. They’re special. Then there are the bog-standard humans, who’ve trained to be superheroes, like Kick-Ass, and Iron Man. Black Widow is the second kind. She’s a martial arts master, world-class athlete, weapons genius and to top it all off…a ballerina. I suspected ballerinas were dangerous after Black Swan, but this proves it…

Scarlett Johansson has been the one to bear the bottle and dye her hair scarlet (hahahahahahaaaa…oh, shut up brain) as she’ll be kicking serious supervillain hiney as Black Widow.