“I’ve been dreaming of a true love’s first kiss.”

Yeah, haven’t we all, love. 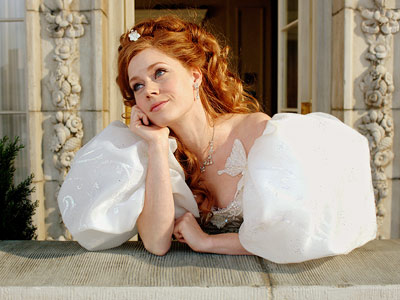 So we didn’t have to cast our minds very far back for this week’s ‘I Remember’ movie. But that doesn’t make this film any less of a classic.

Genial, jovial, and most importantly, ginger Giselle is the soon-to-be queen of cartoon wonderland Andalasia until her future mother-in-law pushes her down a magical well into the real, gritty world of New York City. Some eccentric potential in-laws just put you on a lie detector and ask you some awkward questions, but that is a bit extreme, wouldn’t you say?

So her sunny and musical number-inducing disposition is put to some serious testing in the Big (and potentially Poison) Apple, as she makes pals with a divorce lawyer and his daughter, cleans up with some cockroaches and gets the whole of Central Park up and dancing while she waits for her Prince Edward to come and find her.

With this movie, Disney rewinds and rediscovers it’s golden era: the 2D animation, and brings it all into the 21st Century. Enchanted shows us elements of all the greatest Disney princess classics: Snow White, Cinderella, Sleeping Beauty, The Little Mermaid and even Beauty and the Beast. Some of them are only manifested in brief shots, like the bubble from Cinderella, but they’re all there in some shape or form, almost as though Disney wants the young children of today to love all the best bits of the old movies as much as the last generation did.

And there’s a difference with Giselle, she’s not just a princess with extravagant clothing and a walloping good singing voice; she’s got some guts too. In the climax of the film, she has some pretty good sword action with a fire-breathing beast, with the love of her life on her mind, and only a chipmunk for assistance.

Amy Adams is pretty astounding as Giselle, and she’s got the wide-eyed innocence down to perfection. But James Marsden is stellar in his supporting role as Prince Edward too, having a hefty set of pipes himself, and took the ‘just a pretty face’ routine to a new royal high.

There’s some cracking CGI with a dragon, great costumes made out of curtains and some tunes that are SO catchy, you’ll be singing them for a month and you’ll annoy everyone you know. Trust me, I was singing ‘Happy Working Song’ on the Tube the other day without realising. Embarrassing just doesn’t cut it.

I think of Enchanted as a love letter to the old animations. While we all adore Pixar’s work with 3D (because boy can they make a tearjerker), the 2Ds were a massive part of a lot of people’s childhoods. Everyone knows the songs, everyone at one time owned a costume and everyone secretly weeps a little at the happy endings, even in bitter old age. Each replicated shot from an old movie in Enchanted is a little “I love you” message, however fleeting or subliminal, and will definitely ensure that we plonk our kids in front of the same films on a Saturday afternoon to keep them occupied. I know I will.

Previous Article
I Remember: Wizard of Oz
Next Article
Why I Went Back To Ginger